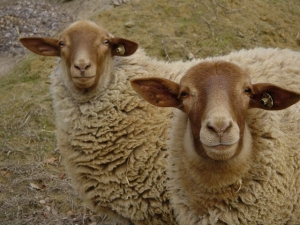 Four years ago, my husband left his corporate job to work with our son.  His life drastically changed then. Instead of doning a suit and tie and making his way to the bus to drive into Manhattan everyday, he rolled out of bed, brushed his teeth, put on a clean sweatshirt, and went to his computer for the day.

Around that time he also took over the task of caring for my sheep.  This came about because shortly before I had the first hip replacement, one of the spawn of Slick dove in between my legs and took off, me riding her backwards until I fell off.  I have to tell you that during this fiasco, my daughter was holding onto a tree so she wouldn’t fall over, she was laughing so hard.  It was about during this time that my doc forbade me to set foot in the pasture until we got rid of the offending sheepsters.

I really didn’t like those new sheep!  Their father was the ram from hell; Bruticus was his name.  I saw an ad in the local fiber group for a Baby Doll Southdown and it turned out to be Bruticus.  At that time, breeding my two to another California Red sheep wasn’t a possiblity because there were no rams available.  In my ignorance, I thought a nice, small ram would produce nice, small sheep.  Wrong.  First of all, because as my husband said, ‘Baby Doll, my ass,’  Bruticus looked more like a small Bison than a small sheep.  He had a giant triangular head and loved to knock me down when he saw me bending over his food trough to clean it.  The first time that happened, I delighted in calling a friend to come right over with her Elasticator and rid him of the source of all that testosterone.

The lambs that resulted had no personality, like their father.  I have said before in my blogs that my two girls are the smartest, most loving pets that you can imagine.  They will come in and watch TV if allowed.  For years, we let them roam the yard until Slick figured out a way to open the sliding door on the sunroom.  We were sitting in the den, watching the news, when Jim said ‘Don’t make any fast moves, just look up in the kitchen.’  There stood Slick, dreamily chewing her cud, with Spot close behind.  I just stood up and said ‘Get out of here, you two!’ and away they went,  Slick first clicking her heels to the left, fortunately not squatting first, which they are known to do.

She would also stand on her two hind legs, utters swinging in the breeze, up against that door wall, and beat on it with her hoof like there was no tomorrow, bellowing to get in.  We finally had to fence the yard around the house because we were afraid she would break the door and hurt herself.

Every day at four, Jim would go into the kitchen and begin preparations for feeding the dogs.  The sheep must have seen him through the windows, although they are tinted and not that close to the barn.  They would come over to the fence and start with their “Maa, Maa, Maa,” until he went out to give them their kibble.

An acquaintance mentioned that she was looking for some sheep for a petting zoo.  I perked right up!  Bruticus and his spawn had a new home.  That left me with my two original girls, the loves of my life.

My sheep are so easy to care for, you barely know they are there  unless they speak.  They will come up to me and nuzzle me.  Seeing them in the pasture everyday, hearing them call to us has been a pleasure I am not willing to part with.  I thought I had their future neatly planned.  But like most of my ‘dreams’, things I have been basing my life on this past six months, it is now up in the air.  I am desperately trying to find someone to board them for a few weeks until we are settled in our new home, which we have not found yet.

The logistics and timing of getting them from one barn to another, is mind boggling.  We have to muck out the stalls here in NJ so they are nice and clean for the new owners.  Somehow, the sheep have to be cared for during this time.  Then we have to get them to our new location, wherever that will be, and keep them somewhere until we arrive ourselves.

Its 3:44 AM, about the same time I was up, blogging last night.  I think the little worries about the move may be bothering more than I realize.  What am I going to do with my sheep?

I started contacting people I have found online to see if I can’t find a boarding farm on the other end.  There has to be an easy answer.  The thought of having to put them to sleep because of a two month tops limbo situation seems unbearable.

Like almost everything else lately, I am sure this too will have a silver lining.  Just as I begin to dispair, something occurs to me, almost an epiphany, and everything is ok.