I saw a poster today.  It was a picture of an Adirondack chair, on a beach someplace tropical, with an ocean that was impossibly aqua.  The caption read Relax, Renew, Retreat.  Having come back from the shore just Saturday night, and still feeling out of touch in a nice way, I tried to put myself in that place and found I could not.  I can’t vacation for too long.

We rented a really lovely, three bedroom condo in Fenwick Island for a really lovely, low price.  The owner is a co-worker of  Jen’s at Jefferson.  He told her midweek to tell me I could stay the next week as well.

The first days at the beech were glorious, with warm, sunny days and cool, clear nights.  My friend from Michigan and her teenaged daughter joined me Sunday night.  We reconnected and shared many laughs and stories from the heart.  The trip was made for them under some duress; they had spent the week prior to their vacation in a courtroom, testifying again the young woman’s rapist.  Fortunately, he was brought to justice.  But at what cost?

My heart ached as we talked late into the night.  The pain of having the defending attorney cross examine her daughter had taken its toll on my friend.  She is a brilliant and sensitive writer, yet I could hear the worry and self incrimination in her voice.  What was lost in her emails to me came through loud and clear in her voice.  I found myself feeling protective of them both, yet unable to help in any way.

Days in the sand and many, many hours of talking and rehashing seemed to help.  But when they left, the good weather left with them, and the rain came.  Jim and I did a little walking on the beach, looking for nonexistent beach glass and shells. I broke my raw diet and ate shell fish and french fries; delish!  The rest of the time I ate my fresh fruit smoothies, salads, veggie burgers, etc. This is a raw tostada with the taco shell made of raw corn that I dehydrated and the taco meat made of ground up nuts with spices and other good stuff.  The picture is a little light, that is avocado and salsa on top. 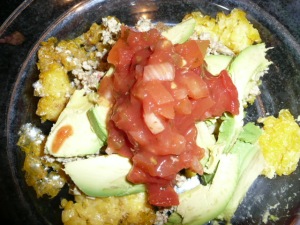 Jennifer came  on Wednesday with her two dogs and the real fun began.  My husband forgot his computer (yeah!!!) and although he could get his email on his phone, by Thursday night, the stress was starting to show.  So I took pity on him and told him he could leave.  I have to say, he packed in record time and was out of there by Friday morning!!!  He also didn’t waste any time picking up our dogs, and telling me how happy they were to see him.  When I have picked them up from the kennel in the past, they didn’t want to leave.  I was ready to kill them.

I read five books while I was there; The Kite Runner, which was one of the best books I have read in many years, A Thousand Splendid Suns, by the same author, also good, Evening News, good, A Painted House by John Grisham, really good, and Trading Up by Candace Bucknell of Sex in the City fame, forgettable.  It could have been that the first four books were so wonderful that nothing could beat them.

The week was so relaxing and everything I needed in a vacation, that I considered staying into the next week when the offer was made.  But when Jim left, I realized that what was so wonderful about it was that I was with my family.  So as soon as Jeni decided to leave on Saturday, I was right behind her.

While I was gone, Janeen’s diagnosis was made; AV malformation of the carotid artery.  She will have a procedure done by an interventional radiologist that will seal it off by threading instruments up through the vessels in her groin.  I have to be careful not to say too much around my son and husband unless I am prepared to revive them. So I am so happy for her; not to trivialize what she has yet to go through, but that she doesn’t have to have any surgery that could leave her face paralyzed, and that she doesn’t have cancer.

One of the first things I did when I got home was to grab my spinning wheel.  Little Reilly was so happy I was home and he wanted to be next to me at all times.  He made a little nest out of the pile of wool I was spinning and took a nap. 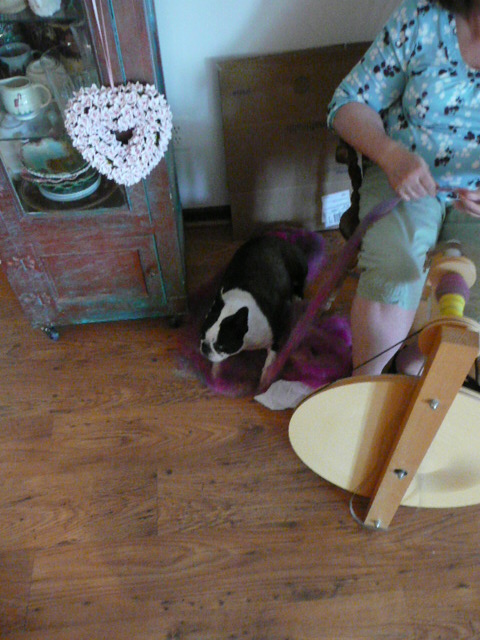